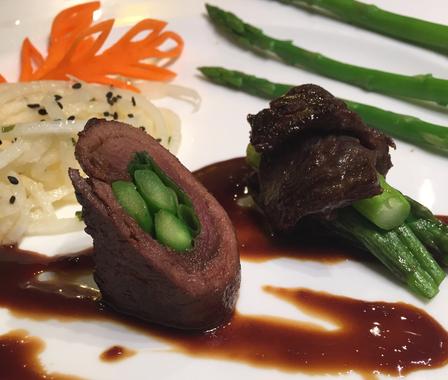 Slice the emu filet very thin. One at a time, put the sliced emu cuts between two pieces of plastic wrap and use a meat tenderizer to thin the slices a little more. Combine the ingredients for the marinade, place meat and marinade in a bowl or ziplock bag, place in the refrigerator for at least one hour. Blanch the asparagus by placing it in boiling water for one minute and immediately removing it to a bowl of ice water to halt the cooking. Cut the green onion into about 4" sections or about the length of the filet slices. Remove the emu from the marinade, and reserve the marinade. Lay the long flat slices of emu out on a cutting board, add two green onion and 2-3 asparagus on top toward the edge closest to you and roll

Beef Negimaki was one of our favorite appetizers when we would go out for sushi pre-alpha gal. After discovering Emu as a beef alternative I had to give this a shot. It was an instant hit. This can be served as an appetizer or entrée.

The AlphaGal Kitchen
View on Mobile