Preheat oven to 425F. Rinse emu necks and pat dry, salt and pepper the necks, slice ginger in half lengthwise, slice onions in half, put the neck bones, ginger and onions on a cookie sheet or large roaster and place it in the oven for 1 hr.

Remove emu necks, ginger and onions to a stock pot scrape all drippings into stock pot, add water and fish sauce. Tie spices in cheese cloth and add to pot. Simmer for 1 ½hours. Skim any foam or particulates in order to keep the broth clear.

After 1½ hours you can remove necks and try to work some meat off of them to add to the soup later, I left it on there to make the broth meatier. After about 1½ - 2 hours removed the spices at this point as the flavor seemed unbalanced, which ended up turning out perfect. Simmer at least an additional 2 hours.

Remove emu necks and strain broth though a very fine sieve and cheesecloth, return clarified broth to stove and keep at low simmer until serving.

Once noodles are done, put some in deep bowl, top with some raw emu meat, cover in the simmering broth broth, add toppings of your choice. Add some chili pepper sauce such as garlic pepper sauce, Sambal olek, or sriracha.

My very first alpha gal reaction came after making homemade beef phở for the family.  Years later, when I first found emu, I had to try making emu pho.  It’s really amazing how this large bird tastes so much like beef. 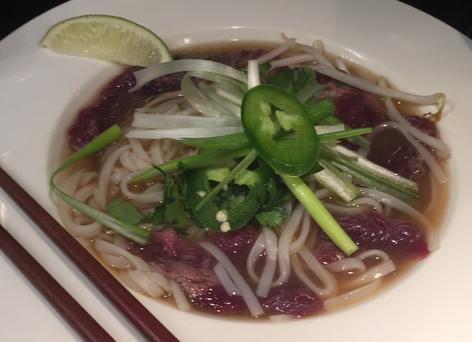